CAD4U has many loyal users including those who have progressed from RoboCAD and CAD4U for DOS ... without having to abandon their considerable investment in time and money just to make the move to a Windows operating system. CAD4U offers greatly enhanced functionality within an instantly recognisable environment with the added advantage of being able to access all existing drawings. 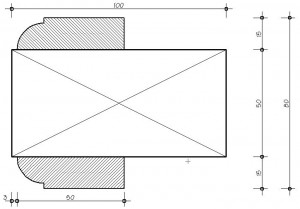 Something I have found very useful in Windows 7 and 8 is the Snipping Tool. This little MS app allows the capture of an area of your screen – any area.  Apart from when I need to create a graphic for inclusion in one of my websites, I have also found it useful when I need to send a small drawing to my builder without having to create a PDF etc. For example, the detail to the RHS:

BTW the image has been ‘dumbed down’ for inclusion in this post.

This was ‘snipped’ in CAD4U, copied and then pasted into an email, but options are also available for  ‘send to’ an email recipient either in the body of the email or as an attachment.  The shortcut menu invoked using RMB is shown below:

Now that I think about it, I realise that the very first version of RoboCAD, back in around 1987, had a similar function using the only supported GPU … the monochrome ‘Hercules’ graphics card. It was taken out in the next version when even lower res. colour EGA was supported